Tui Bulgaria late deals include all inclusive hotels and accommodation options in some great holiday resorts.

Bulgaria is bordered by Romania in the North, Greece in the West and Turkey and the South. The capital city of Bulgaria is Sophia and it is also the largest. 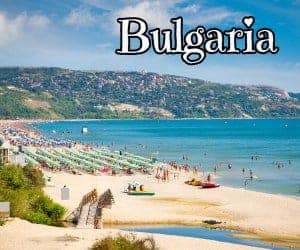 Tourism in Bulgaria was first started in the 1960s when Bulgaria was under Communist rule with a few holiday resorts such as Albena, Golden Sands and Sunny Beach. Today things are much better and the resorts have been upgraded and new resorts have appeared as well. Bulgaria is also a very popular ski holiday destination. Bulgaria offers excellent skiing at good prices compared to many other traditional ski holiday destinations in Europe. Tourism today in Bulgaria doesn't only revolve around its beach resorts as other forms of tourism and tours are becoming more popular. There are no opportunities such as mountain hiking, biking tourism and architectural based holidays and tours. Bulgaria is also seen as a destination that offers good value for money which attracts holidaymakers looking to make the most of their currency exchange rates. Weather wise in July and August you can expect temperatures to generally exceed 30°C and obviously been cooler in early spring and late autumn months. Popular holiday destinations in Bulgaria include Obzor, Nessebar, Sunny Beach, Golden Sands, Sozopol, Pomorie and others.

Sunny Beach is the biggest and probably the most popular of the Bulgarian Black Sea holiday resorts. It is located on the southern coast and is approximately 30 km from Bourgas airport There is a short line stretching for approximately 8 km which has lots of beachfront hotels and hotel complexes. There are lots of shops and restaurants as well as bars along the beachfront area to choose from. Sunny Beach is a popular family holiday destination particularly with families who like a good beach. There are also plenty of nightclubs, bars and venues with live music to entertain most people in the evening. Nessebar is nearby which is a UNESCO protected town and offers a good selection of restaurants and cafes.

Golden Sands is another popular holiday resort and is located to the north of the Black Sea coastline. The resort is approximately 25 km from the city of Varna which is also where you would fly into before getting a transfer to your hotel or apartment. Golden Sands has smaller beach however it is still over 3 km in length and has been awarded EU blue flag status in the past. For many holidaymakers a trip to Varna offers access to lots of shops and is well worth a day trip to visit. The resort is situated on a hillside and may not be suitable for anyone with walking difficulties however there are some hotels located near the beachfront so please check before you book. As you'd expect with a popular holiday resort there are ample bars restaurants and evening entertainment options.