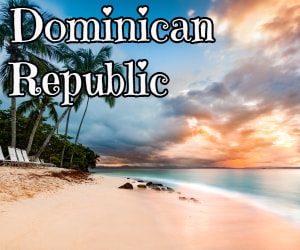 tourists to increase year-on-year. The Dominican Republic is actually the second largest Caribbean nation after Cuba and is of a similar size and also has a similar population. The population is estimated to be around 10 million with 10% living in the capital city of Santo Domingo. The Dominican Republic is a popular destination for golfers and they also boast the Caribbean's highest mountain peak and largest lake. In the colonial zone of Santa Domingo is an area classified as a waddled heritage site by UNESCO. Holidays to the Dominican Republic are on offer from a large number of UK travel firms due to its popularity and will find a good range of hotels in all the popular resorts.

There are typically Tui flights to the Dominican Republic from Birmingham, London & Manchester.

Tui Puerto Plata late deals - Puerto Plata is located in the North the Dominican Republic and offers holidaymakers a number of beautiful scenic beaches. Further inland is the Cordillera Central mountain range which has some of the tallest peaks. Popular resorts in Puerto Plata include Bahia Maimon, Costa Dorada and Playa Dorada. Each area offers a high standard of accommodation and some are ideal for families as they have excellent child friendly facilities.

Tui Samana late deals - Samana is one of those holiday destinations that despite the increase in tourism has manage to retain its
character unlike some more commercialised resorts. Samana resorts popular with to this include Samana Town, Cayo,Levantado and Las Terrenas.

There are a large number of all inclusive properties to choose from and the Dominican Republic so it is very likely if there is any availability that you should be able to pick up an all inclusive late deal. However due to the cost of the long flight and the high standard of some of the accommodation it would be unrealistic to expect a really cheap late deal. However there are always exceptions and a large number of holiday companies do offer holidays in the Dominican Republic therefore it is possible they could have excess capacity that the need to sell at a greatly reduced price.

Tui A La Carte Late Deals in the Dominican Republic