Spain is a great destination for a quick late deal with lots of popular holiday and city break destinations to choose from. Another good reason to choose Spain late 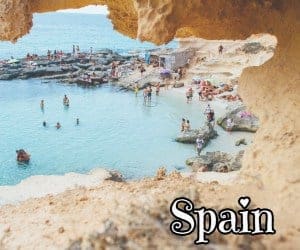 deals is the sheer number of flights and travel firms offering holidays to Spain. There will be more chance of getting availability obviously depending on the date you have selected and the time of year. Spain also offers lots of late deal destinations with short flights which are ideal if you are short on time.

The best Spanish destinations will depend on what type of holiday you are looking for so if you want lots of nightlife then Spanish destinations like Benidorm, San Antonio in Ibiza or Magaluf in Majorca could be worth looking for. Depending on your age group some of the holiday firms offer special holidays for holidaymakers generally aged between 18-35 years old. Look out for Tui SCENE holidays which offer accommodation options near all the nightlife.

Most Spain late deals offer some family friendly destinations in Spain such as the resorts of Cala Bona, Puerto Pollensa in Majorca, most resorts in Menorca, Port Des Torrent in Ibiza or even Salou on the Costa Dorada. There are so many others and generally will depend on what type of holiday you are looking for.

Late deals in Spain in the winter are more popular in the Canary Islands such as Lanzarote, Tenerife, Gran Canaria or Fuerteventura. This is also reflected in the price so if you are looking for a cheaper option have a look at Benidorm or one of the resorts in Majorca or the Costa Del Sol. In the summer months between June and September most destinations are generally all right weather-wise however in April and October be more careful what destinations you go for.Canary Islands late deals holidays are hard to get over the Christmas & New Year period and also the New Year on its own. It is possible sometimes to pick up late availability for Christmas on it's own subject to availability.

All inclusive late deals in Spain should be reasonably easy to find as all inclusive holidays in Spain are very popular. You should be able to find something in most Spanish holiday destinations. Tui holidays have a huge range of accommodation offering all inclusive plus there are also Marella cruises which offer all inclusive cruises.

City break late deals in Spain to look for include Barcelona, Madrid, Palma and Malaga. There are lots of others to choose from however these are amongst the most popular. Barcelona offers lots to do and see with access by rail up and down the coastline to other Spanish towns. Some destinations are available from holiday airlines on charter flights as well as low cost scheduled airlines as well. A good example of these flight destinations would be Malaga and Palma. Getting accommodation only is easy.